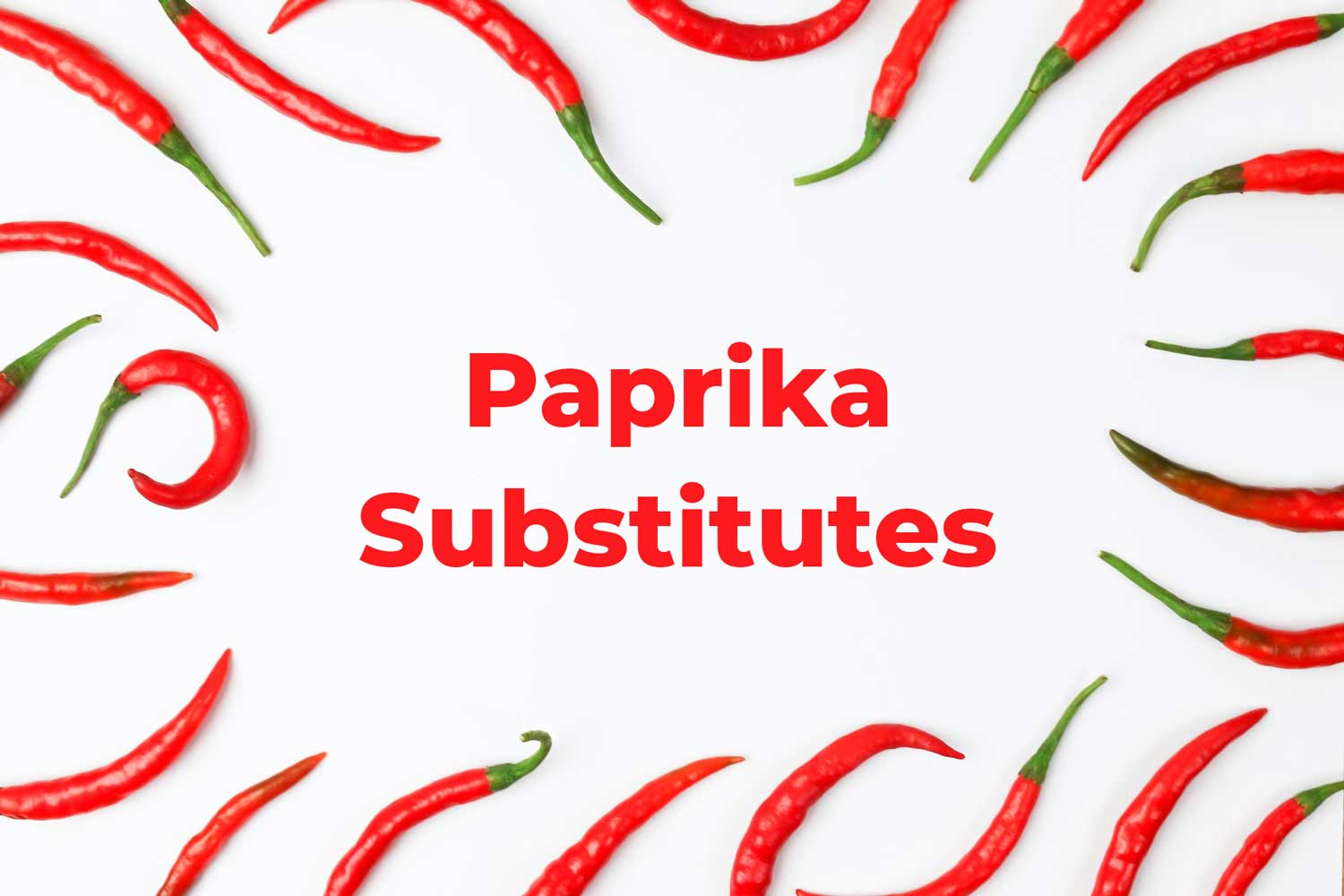 Paprika is a popularly used spice with a beautiful and bold red color that comes from smoothly ground delicious pepper pods. If you love this spice, you probably have stocked it in one of the drawers of your kitchen.

However, what happens when the stock runs out and you have to use it in that favorite recipe? Here’s a list of the 15 effective options you can use as a paprika substitute:

This is one of the most popular paprika substitutes. Cayenne pepper has an almost similar color to that of paprika. The cayenne pepper work well as a garnish and, thus, can be utilized for color in a recipe such as paprika.

The pepper is prepared by drying cayenne chilies at a moderate heat level. Once ready, the cayenne pepper provides a fiery flavor to your recipe. The powder is certainly hotter compared to paprika and is, therefore, recommended that you use it in a smaller quantity than the normal paprika amount. Cayenne pepper is said to be beneficial in weight loss and treating pain.

Pepper powder is also referred to as bell pepper powder. Its source won’t be a surprise to you – it comes from dried red, green, orange, and yellow bell peppers, which are then ground into the pepper powder using zero levels of heat.

The powder looks almost like paprika and is fruity and sweet. It’s also believed to contain lots of Vitamin C. Generally, pepper powder is a perfect paprika substitute.

A versatile and expensive spice, Saffron is very popular in many parts of the world, particularly the Middle East. The spice is gotten from the well-known crocus flower plant. In comparison with paprika, saffron happens to be more orange-red, which is also believed to of higher quality than paprika. It has a complex flavor, which is described as slightly metallic and bitter. This paprika substitute contains crocetin and crocin, which come in handy in the research for Alzheimer’s treatment.

This powder is gotten by drying and smoking jalapeno pepper. It’s an amazing smoked paprika substitute as it has a high smoky flavor. However, it is brown color is different from that of paprika. Since the powder comes from paprika-like peppers, it makes a suitable paprika substitute.

These berries grow on wild bushes in the Middle East and Mediterranean regions. Sumac berries spice delivers a robust burgundy color, which makes it a nice alternative for a color in a dish or recipe. It has tart and fruity flavors and it’s full of antioxidants. Additionally, the spice is rich in Vitamin C and omega 3 fatty acids.

Turmeric is also a suitable paprika substitute. It’s gotten from an herbaceous perennial plant with similar qualities as ginger. It’s an anti-inflammatory spice well-known for its deep orange-yellow color. Historically, the color has been utilized as a dye. Turmeric’s flavor is described as slightly gingery, earthly, pungent, and bitter.

Though not so popular, Achiote powder is a perfect paprika substitute made from ground annatto seeds. The annatto seeds have a bright and red-orange color. The achiote powder’s flavor profile is peppery, nutty, and earthly. While using it as a paprika alternative, it’s recommended that you use it in small quantities if your recipe requires a similar color without any flavor. The annatto seeds’ components include Vitamin E and calcium.

The coriander is prepared by grinding dried cilantro seeds, which are found in many regions in Europe and Asia. The flavor profile of coriander is, however, different from that of paprika and cilantro leaves because it has warm, earthly, and citrusy, as well as buttery notes. Its color isn’t as beautiful as that of paprika but a perfect paprika substitute. It’s also known to promote a healthy liver and gut.

Cumin is popular and easily found all over the world. It’s made from dried Suminum cyminum herb seeds. The spice has a powerful aroma and delivers a warm and earthly flavor to a selection of foods such as Tex-Mex cuisine. This spice is rich in Vitamin B.

This powder is important and widely utilized in Indian foods. It’s made from a combination of spices such as turmeric and cumin. The red curry powder is, however, not as red as paprika. It’s prepared from red chili peppers that give it the reddish color. Though the red curry powder and paprika have very different flavor profiles, the former can still make a nice paprika substitute.

This type of pepper is available in a flake form. It also contains seeds. The spice adds heat to your recipe because it uses a medley of peppers like serranos, jalapenos, and chili. It features a mild pungency characterized by a somewhat sweet capsicum flavor. The red pepper flakes are known to contain fiber.

Chili powder is red and you can easily mistake it for paprika if you don’t read the label. The power is made out of chili peppers but often includes other spices such as cumin, paprika, or garlic. This combination delivers a deeper flavor complexity than in paprika.

Nothing is boring as being unable to enjoy and find pleasure in one’s favorite meal. Undoubtedly, most people enjoy feasting on chili, so having a thin dish isn’t adorable. Even so, now you know how to thicken chili the way you desire by following the above methods.

This spice isn’t in any way related to the white and black peppercorn family but comes from a couple of trees found in South America. Pink peppercorn has a cranberry red color and it brings a higher level of heat than paprika. It also has a distinctive delicious piney taste, like juniper berries. The pink peppercorn is both anti-inflammatory and antiviral.

Looking for suitable spice substitutes for your recipe can be daunting. That’s why; this article will come in handy when you’re looking for ideal paprika substitutes. You have a variety of paprika alternatives to choose from courtesy of this post. Any option will be suitable for you taking into consideration the various textures, colors, and flavors that come with each. Even for a beginner chef, things won’t go south just because you’ve run out of paprika. You won’t lack the perfect substitute for it!