Sage is popular for the important role it plays in flavoring dishes and meats such as turkey. However, just because it works perfectly with turkey doesn’t mean that it’s only good for that one purpose. It has a rich flavor that greatly compliments fatty foods. That means, therefore, that one can use it for a wide variety of dishes. 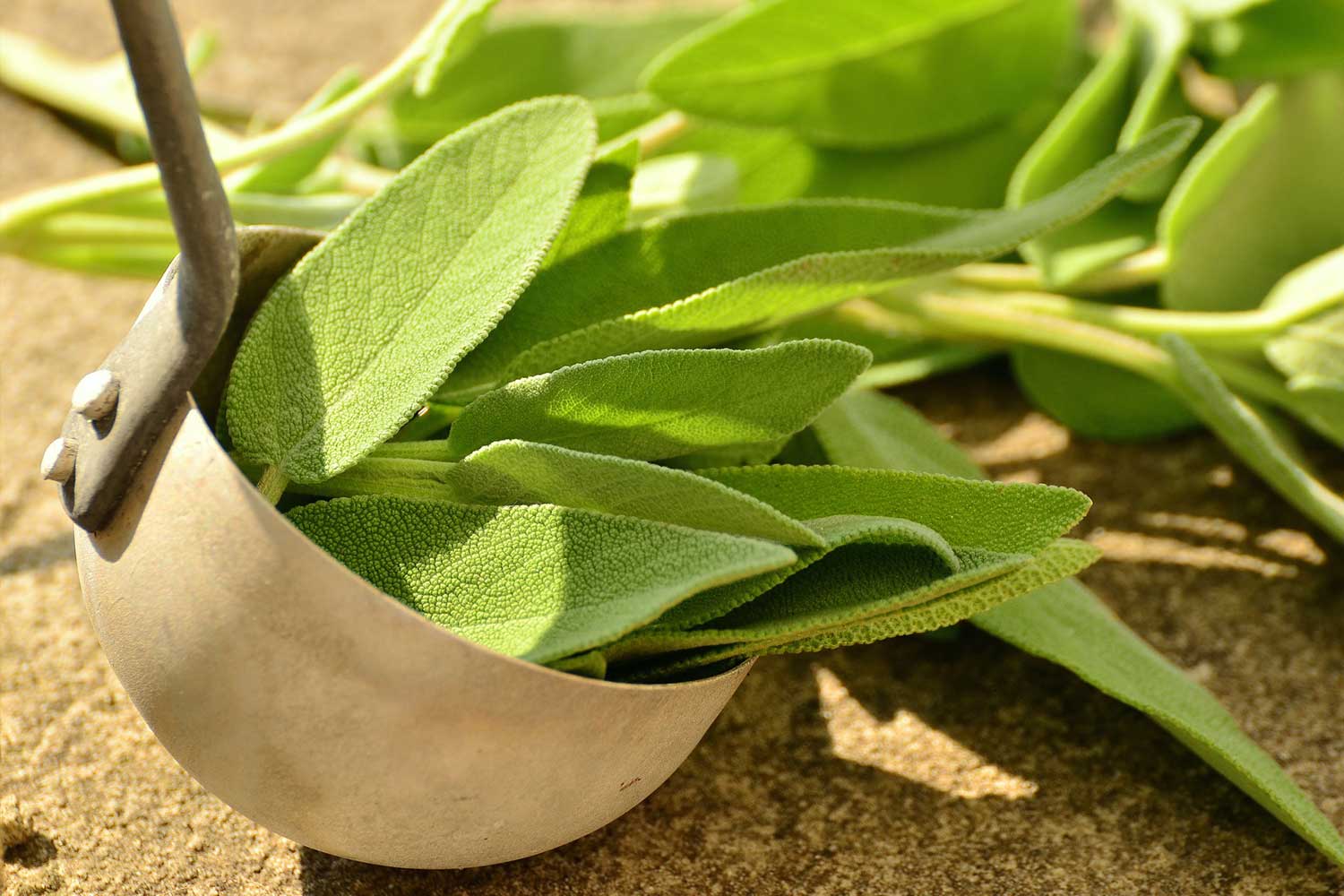 Sage is called Salvia officinalis in Latin. The word is derived from “Salvere” a Latin word meaning “to get saved”. The plant is natively available in the Mediterranean region. Sage grows up to two feet high. It produces leaves with a rich flavor. These leaves are gathered, dried, and utilized as a spice. There are several variations of Sage flavors depending on the region the plant grows. The sage plant growing in Russia come from Afghanistan, originally and spread through Tibet while the plant was first found in Balkan and the Mediterranean regions.

Sage will be very noticeable once put in the meals because of its warm flavor and fragrant aroma. The robust aroma dominates all other meal scents and it provides a fairly bitter taste. The sage spice can taste like a mixture of bitter and sweet tastes.

Many chefs consider Sage to be an important herb for seasoning. It’s popularly used in Italian culinary dishes as the primary seasoning for fishes. The plant gives the meals some peppery taste and it blends well with many dishes and food types, which from this spice and gain an enhanced taste.

If you love making Italian Osso Bucco or German-style sausages, you might require keeping some sage around as it’s conventionally used in preparing these dishes. However, sometimes it can run out of stock. When it does and there’s no way to find it as soon as possible, there are some workable alternatives below.

Marjoram is the most favorable Sage substitute. The plant is one of the mint family members just like Sage. Since these two are from the same family, both are similar in terms of flavor profiles. Marjoram and Sage as well as other plants in the mint family can be utilized while dry or fresh.

You should, however, note that the flavor of marjoram doesn’t withstand long cooking. That means that Marjoram should be used only as a sage substitute in recipes requiring it being added at the end such as garnish. Also, you should use a similar marjoram amount that your recipe needs for Sage.

This plant isn’t a member of the mint family. It’s not as popular as other Sage substitutes we have mentioned in this post. But, Savory is widely used in Canada for poultry the same way Sage is utilized in the US and other regions.

There are two varieties of Savory – summer, and winter savory. The winter one is the popular and wide utilized while the summer one has a somewhat bitter flavor though tastes the same as the majority of other alternatives. What’s more, the plant’s flavor is fairly mild and delicate and it resembles that of Thyme and Marjoram. When replacing Sage with Savory, utilize the same amount your recipe needs for Sage.

Thyme is also a suitable alternative to Sage. It’s a great aromatic herb from the family of mint. The herb is large utilized in Mediterranean cuisine. It can also be utilized in flavoring a wide variety of vegetables and meats. It’s versatile enough to be utilized in Italian pasta sauces made from tomatoes.

Another essential fact to note about Thyme is that unlike Marjoram, it can withstand long cooking, which means that it’s ideal for dishes that have to be braised for many hours. This herb can be used in dried or fresh forms. However, when using it as a Sage substitute you better use the fresh form. Also, note that you should use Thyme in the same amount as you would use Sage.

If you’re out of Sage and you need an emergency substitute, you can utilize Poultry seasoning – it’s usually a nice option. The spice blends perfectively with meals and is popularly used on chicken and turkey. Poultry seasoning is an outstanding Sage substitute because it includes Sage among its ingredients. Other ingredients in Poultry Seasoning include Thyme and Marjoram. When you utilize Poultry Seasoning to stand for Sage, you should utilize in precisely the same amount that your recipe needs for Sage.

Rosemary is popular throughout the world for its strong aroma and excellent flavor. The spice is another herb found in the Mediterranean. It’s known for its distinctive and pungent fragrance that can easily dominate the flavors of other spices and herbs. When you use this spice as a Sage substitute, please use a third of the quantity that your recipe needs for Sage.

Since it’s a Mediterranean herb, Rosemary has powerful citrus and wooden flavor that makes a wonderful alternative for Sage. The spice is mostly used to spice up meats but you can also use it in other dishes and it will taste great.

You should always remember that Rosemary has a strong flavor that will likely dominate other herb flavors. For that reason, you shouldn’t use as much of it as the recipe requires Sage. Rather, utilize a third of the quantity. With only a small amount of Rosemary, your dish is going to be a lot richer in taste and flavor and will be as if you’ve put Sage.

As you’ve noted, there are several Sage substitutes. But, what’s best? Well, we live that to you to decide depending on your understanding. For some people, it’s most poultry seasoning as it already contains the Sage within it. So, please try and find out which one is good for you.

Nevertheless, for an emergency, we recommend you use any of the above spices and you’ll be just fine. Probably, you know how the majority of these spices taste like. Therefore, considering their flavors, you’ll know the best one to pair your meals with. Decide and have a good time!